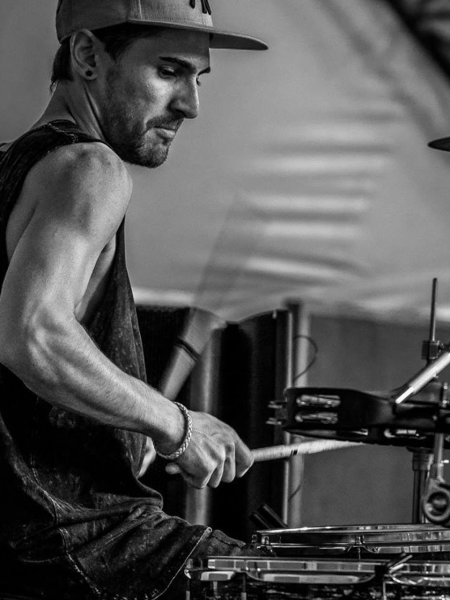 Giovanni was born and raised in a small town of Sardinia, a Mediterranean island off the west coast of Italy on July 8th, 1992. Gio started playing the drums at around 7 years old, and only 5 years later had saved enough money to buy his first beginner kit. His music influences have shaped his sound throughout the years, going from old rock classics, to prog-rock, punk, and then into ska, which turned into reggae, to then moved to hip-hop, soul and funk.  After two years of studying drumming techniques under the wing of teacher Cristian Carboni, and many years of self-practice, Gio joined his first touring band as a drummer at 15.

The band, called Dubin’Island, was a reggae-roots project which allowed Gio to explore the reggae world in-depth and all its beliefs. This is also allowed Gio to started appreciating and getting curious about sound engineering and the whole recording studio environment.

While observing the work done on some dub version joints on their second EP, he was left fascinated by how someone could manipulate sound, create waves of emotions by turning knobs, playing with delays and reverbs to create dimensions. He started working on his little home studio, with a simple setup which allowed him to do some simple recordings and music production.

Despite this being more of what could be called a “playing around” phase of his career, Gio spent a ridiculous amount of time beating the drums, experimenting and making noise in that room. It motivated him to learn more about this craft, which he was unaware of at the time, in professional terms.

After graduating and leaving Dubin’Island in 2010, Giovanni visited Cape Town for the first time were encouraged by his parents, he decided to come back months. Later to stay, primarily to study English which he had never taken very seriously at school. Initially, he worked occasionally and in semi-permanent jobs in the hospitality field, such as a bartender and waiter, as well as playing the drums for local corporate bands here and there, while studying for his Cambridge qualification.

In 2012, Gio took part in auditions and was welcomed to join the band Paige Mac, a soul-rock project fronted by lead vocals and guitarist Paige Mac Mahon. At the time, the band had just released a video of their single ‘Atrophy’ that went viral and attracted the attention of major recording labels such as Sony Music, EMI and Universal Productions. After recording their first four-track EP ‘A Moment’s Nostalgia’ with Universal Productions, the band travelled across the country earning themselves a slot in most venues and music festivals.  In 2015, Paige Mac recorded their second studio album independently ‘Let The Right Ones In’, before the band separated.

This project was very close to Gio’s heart. It opened his eyes to the South African music world, showed him places and got him to meet people that have shaped and influenced his life in so many different ways. When Gio was not playing the drums with the full band, he was travelling as the sound engineer for Paige Mac’s acoustic shows, which allowed him the opportunity to work with live rigs and lighting. It was around the same time that Gio came across Cape Audio College, where he enrolled for the three years diploma in sound technology.

This course of study, while engaging and networking with other artists in the industry, opened so many doors for Gio. His full understanding of sound, the different applications of it and the knowledge he gained was a complete game-changer, without mentioning the strong friendships he made, which helped him grow as a musician, sound engineer, and as a person.

It is also through Cape Audio College that Gio met Antonio Cencherle, a dear friend, but also an incredible producer and human being. At the time Antonio was busy producing and recording the latest radio hit from The Rudimentals, ‘Bubblin’ – between all others. A small bunch of students voluntarily went to help with the single’s recordings in Cape Audio College’s Studio 6. Coincidentally, not even a week later their drummer, Kyle Grey, left the band. Gio was invited to audition and with a huge surprise, got the gig, and became the drummer for a band that he had been fond of for a long time.

Gio still plays for The Rudimentals currently.  After getting his diploma in sound engineering at Cape Audio College in 2015, Giovanni worked for over a year working in the live sound industry for a few event companies. Still, he realised very quickly that it wasn’t for him. This led him to instead pursue studio work by applying for dozens of jobs online and taking on plenty of unpaid internships and job shadowing wherever he could find a spot.

Later on, thanks to a friend, Gio was offered a position by a Comedy Central subcontractor company as the head engineer for their new season of a political-satyric TV series called ZA NEWS. The series was broadcasted on Comedy Central Africa which, strengthened his knowledge in doing recordings, post-production, ADR, sound design, final mixing for broadcast, as well as working on set. – “This was possibly the most instructive professional experience of my life, despite being tested to the limits of my abilities: I realised how much can be learnt by being outside your comfort zone, and I am grateful for it.”

Following the end of his employment contract with Comedy Central about a year later, The Rudimentals became Gio’s primary focus. After reaching two consecutive #1 and a #3 hits on 5FM, and over 100k views on Youtube, the band gained momentum performing on stages such as Rocking The Daisies, Zakifo Festival (KWN), Smoking Dragon (KWN), MTN Bushfire (Swaziland), and headlining the Cape Town International Jazz Festival, Kirstenbosch Gardens, and many more.

The band used to hire out large rehearsal space in the CBD, which is where Gio had the chance to put some time into practising and most importantly, he started offering the space for rehearsals and minor recordings – which then turned into something more serious. Along with his band-mate and good friend Nikolai Athiros, it became more than just a hobby.

After the band was evicted from the building, they were forced to find a new space. The no longer Platinum Studios in Woodstock – a previous photography and recording business which had just closed its doors – became The Rudimentals’ new rehearsal/recording studio.

It was then that Gio started assessing and realising that Cape Town lacked a professional platform for artists and creatives to pursue their career’s. A few months later, his family, together with Doc Mike (guitarist for The Rudimentals) went ahead to purchase the business and undertook a successful rebranding campaign under the name Soundcast Studios.

Soundcast Studios was established in April 2017 as a multifunctional facility to cater to creatives in the music, photographic & film industries in Cape Town. Soundcast studios have got seven fully-equipped rehearsal rooms, photography and casting studios, recording studio and coffee shop, keep gaining new clients daily – mainly based on their firm policy of going the extra mile for their clients, providing engineers on-site for a stage-level rehearsal, technical advice and assistance to the artists, as well as offering high standards of service and equipment at low cost – which has brought back plenty of positive reviews and a constant flow of incredibly talented people, from locals to international acts.

Gio now personally manages the recording studio at Soundcast Studios and all related activities. He also is taking care of the day-to-day running and marketing activities. Outside Soundcast Studios, Gio regularly works with artists in and around South Africa. During the last few years, Gio had the opportunity to share stages and record with several artists, to mention a few: Arno Carstens, Bam Bam Brown, Grassy Spark, Richard Stirton, Orah & The Kites, The Samson Brothers, Born Of June, and others.